Skip to content
TerrierOwner.com is reader-supported. If you buy a product through a link on our site, we may earn an affiliate commission at no additional cost to you.

For decades, Scottish Terriers have been one of the most popular dog breeds in the United States and Europe. Often referred to as “Scotties” and sometimes Aberdeen Terrier or “Aberdeenie,” these lovable dogs are recognizable for their distinctive shaggy coats and rugged good looks.

But there’s more to these dogs than just their appearance – they also make great companions and family pets. If you are thinking about adopting one, we’ll take a closer look at the history and personality of Scottish Terriers, so you can decide if this breed is right for you and your family. 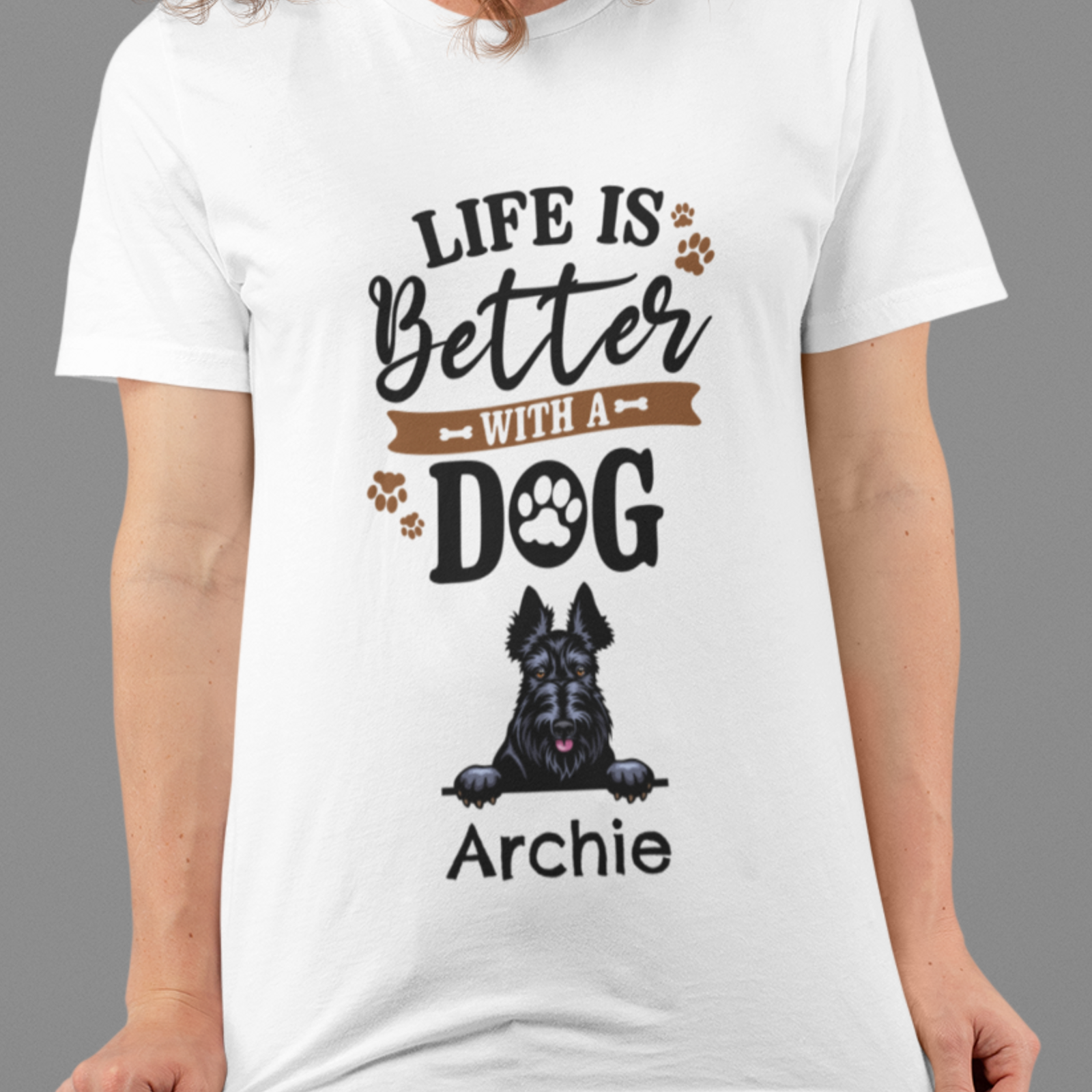 Life Is Better With A Dog Personalized Dog Breed T-Shirt

Save 20% with promo code TERRIER20

History of the Scottish Terrier Breed

The Scottish Terrier is a breed of small dog that has been around for centuries. Originating in Scotland, the Scottie was bred to hunt and guard game on large estates. They were also used as watchdogs and companions, which contributed to their popularity among wealthy families throughout Europe.

Despite its long history, it wasn’t until the late 1800s when the breed began to be recognized by kennel clubs outside of Scotland. In 1881, the Kennel Club (UK) officially registered its first two Scottish Terriers. By 1886, this breed had become popular enough that it was included in Westminster’s first Dog Show in New York City. Today, these dogs remain one of America’s most beloved breeds—and they still make great family pets.

Scotties are one of 5 terrier breeds that originate from the Scottish Highlands. The other 4 breeds are Skye Terriers, West Highland White Terriers, Cairn Terriers, and Dandie Dinmont Terriers.

While they are often confused for one another, they are 5 distinct breeds. So no, Scottish Terriers are not just West Highland Terriers with a black coat.

Scottish Terriers are small dogs, usually weighing between 18 and 22 pounds. They have a sturdy build, with short legs and a long body that can be quite muscular. The breed is recognizable for its shaggy double coat of harsh outer fur and soft undercoat.

Scotties also have distinctive facial features—including bright eyes, pointed ears, and a prominent beard—which make them stand out from other breeds of dog.

Black is the most common color for a Scottie, but contrary to popular belief not all Scotties are black.

Scotties can also be wheaten (light tan), brindle (black with light stripes), or grayish-black. Some wheaten Scotties with particularly light colored coats can easily be mistaken for Westies to the untrained eye.

In addition, Scottish Terriers may also have white markings on their coat. According to the breed’s official standard, white markings are acceptable “only on the chest and chin and that to a slight extent only.”

Scottish Terriers are known for their friendly, loyal personalities and strong-willed nature. They make great family companions due to their intelligence, playfulness and affectionate charm.

Scotties have a reputation of being good watchdogs too, as they will always be alert to any changes in the environment or strangers approaching the house.

Although they can sometimes be stubborn when it comes to training, with patience and consistency you should have no problems teaching your Scottie basic commands such as sit, stay and come.

Scottish Terriers are generally healthy dogs, but like all breeds they can be prone to certain health issues. Knowing about these potential problems is important when deciding if a Scottie is the right breed for you and your family.

It is important to note that not all Scotties will develop these health issues, and regular check-ups and screenings with a veterinarian can help catch and treat any problems early on.

Scottish Terriers are considered a low-shedding breed, meaning that they do not shed as much as some other dog breeds. This makes them an attractive option for those who don’t want to deal with the hassle of vacuuming or brushing away fur balls from their furniture and carpets. However, despite being a low-shedding breed, Scotties still need to be brushed regularly.

With that being said, Scottish Terriers are generally considered to be hypoallergenic dogs as their low-shedding coat is not an irritant for most people with allergies.

Scottish Terriers are active, energetic dogs with a great need for regular exercise. They require at least an hour of daily physical activity to remain healthy and happy. This could include walks, hikes, or games like fetch and tug-of-war.

It’s important that owners provide their Scottish Terrier with plenty of opportunities to get outside and have fun.

One thing to note is that Scotties have a reputation for being a little prickly around other dogs, so use extra caution when taking your Scottie to the dog park.

While not as stereotypically friendly as a Golden Retriever, Scottish Terriers are usually good with children when they are socialized with kids as puppies. If you are planning on adopting a Scottie into a family with young children, it is important to acclimate them to the whole family as soon as possible.

As mentioned above, Scotties are not great with other dogs. However, that mainly applies to dogs that they don’t know. If you already have another dog in your family and are adopting a Scottish Terrier as a puppy, it shouldn’t be a problem.

If your family also consists of a cat, it may be more difficult. The Scottish Terrier hunting instinct is strong, which could lead to problems.

While not always thought of as show dogs, Scottish Terriers have fared well at the Westminster Kennel Club Dog Show over the years.

A Scottish Terrier has won the Best in Show award 8 times at the event, most recently in 2010.

Is A Scottish Terrier Right For You?

Originally bred as working dogs for hunting small game such as fox and badger, Scottish Terriers are now more often kept as family pets. Whether a Scottie is right for you and your family is something only you can decide.

I hope this brief overview of the Scottish Terrier breed has given you a little insight into these dogs. While they are not the perfect fit for everyone, they are certainly a breed that many people swear by and wouldn’t be without.

Kevin grew up with a female West Highland White Terrier named Murphy who was always by his side. Kevin currently lives in New York state with his family including a Labrabull (Labrador Retriever Pit Bull) named Lily.

As the owner of two dogs currently and several in the past, I've had the pleasure of working with and training many different dogs over the years, and I understand how frustrating it can be to try to...

If you have a destructive dog, it can be difficult to keep them entertained with long-lasting toys. You probably know the feeling of joy you get when you come home from the store and gift your pup a...

Thanks for Visiting Terrier Owner. We are a group of terrier owners who want to share our story and help as many other terrier owners along the way as possible!

All articles are written by real terrier owners or veterinary professionals.

The views expressed on TerrierOwner.com are those of the individual authors. Information provided on this site is not a substitute for advice from your veterinarian. TerrierOwner.com does not intend to provide veterinary advice.

This site is a participant in the Amazon Services LLC Associates Program, an affiliate advertising program designed to provide a means for sites to earn advertising fees by advertising and linking to Amazon.com. Terrier Owner is compensated for referring traffic and business to Amazon.